Welcome to My Gluten Free Life! I look forward to sharing my tips and gluten free recipes with you! 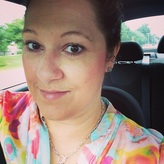